​She is a Steilsteven: This means she has a straight stem - ie the bow of the boat.  The main characteristics of a Steilsteven are: They were sailing ships so would have had lee boards. 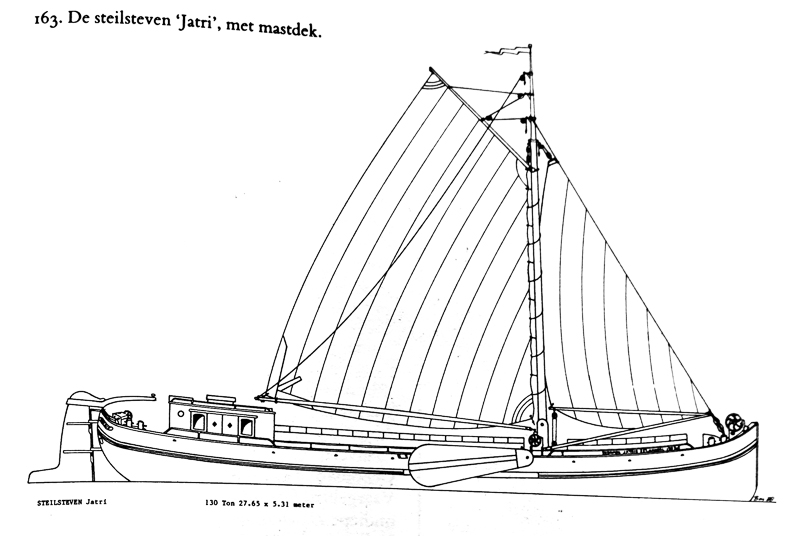 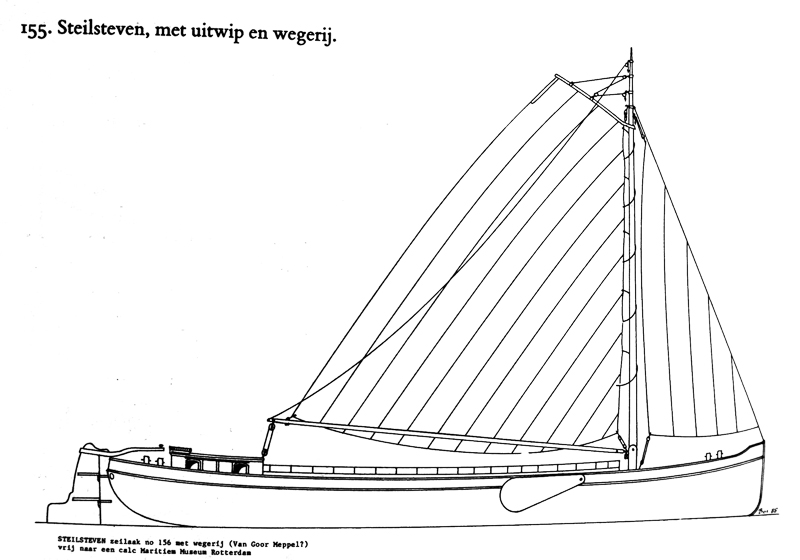 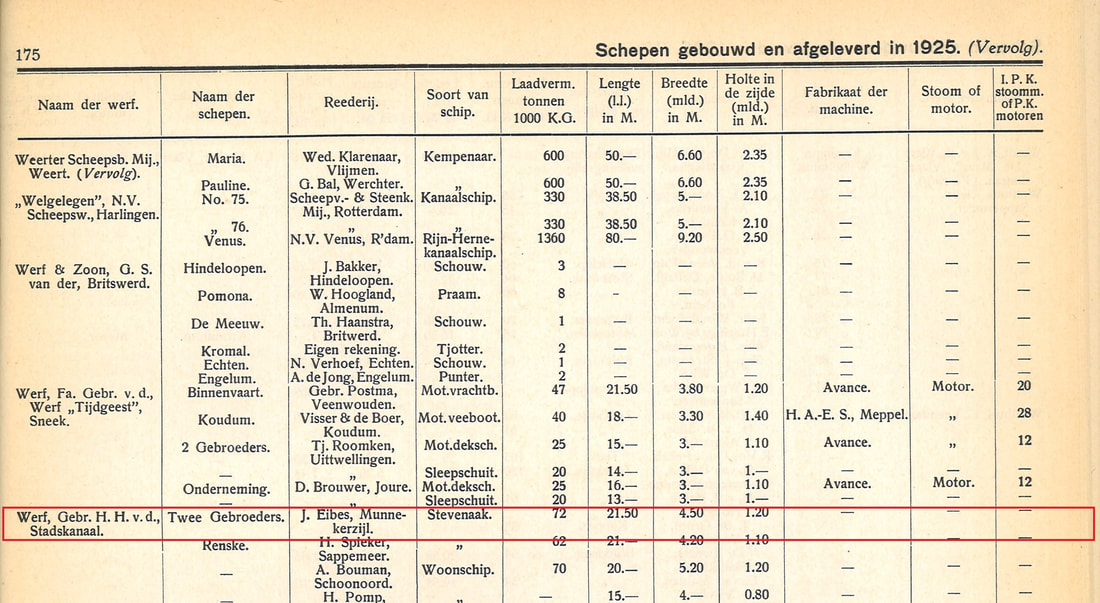 Our barge was originally used for carrying peat.  This was a common cargo for Grongingen Steilstevens, and we have many ads where the original owner is advertising for a mate/crewman to work on a peat boat. 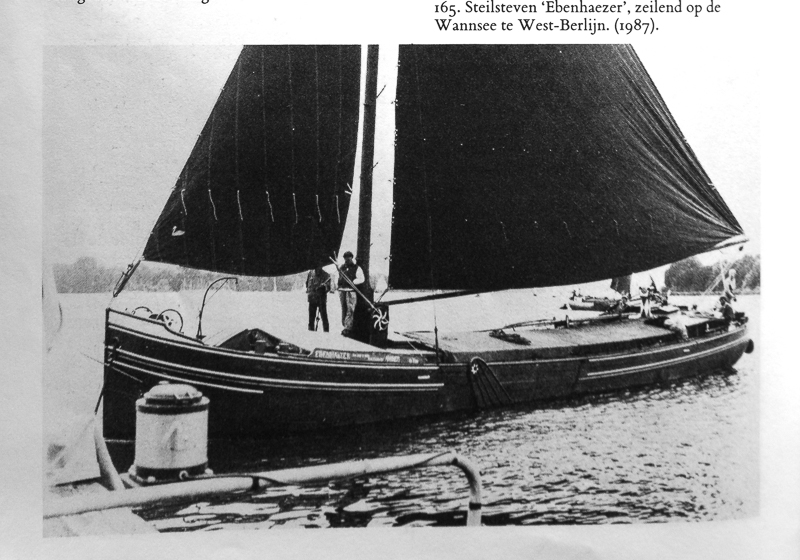 ​The main form of propulsion was the sail, however sometimes they would have poled or been pushed by a small boat. This is a drawing of the type of boats used, and a photo of a Steilsteven being pushed. 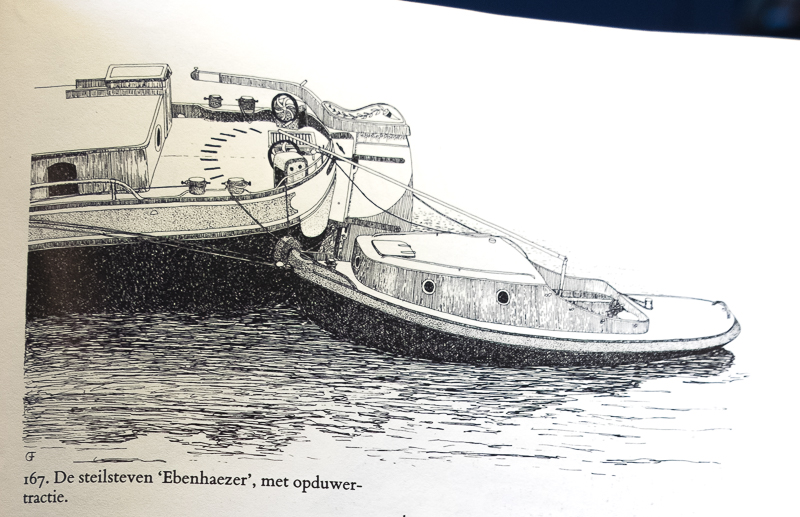 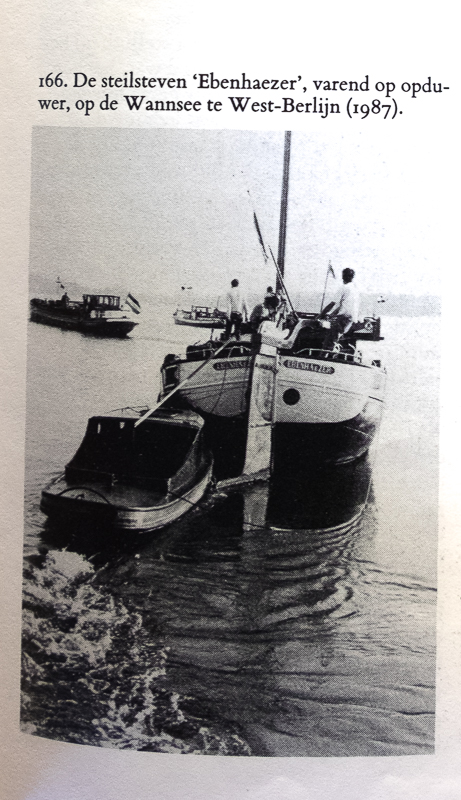 And here is a photo of a fully laden Steilsteven being poled along a canal. 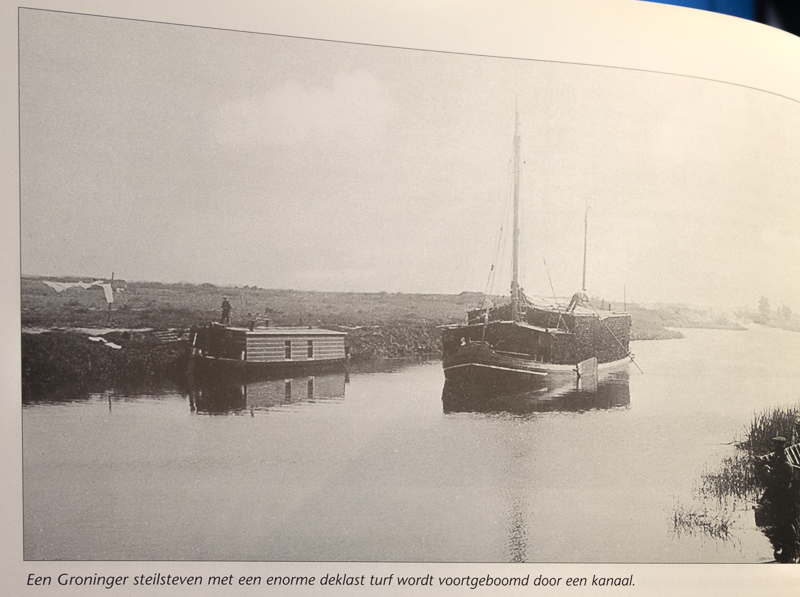 They may also have had a lamme arm (a long arm) over the side with a small motor.
Of course another form of propulsion was for the wife or the mate to pull the boat along. 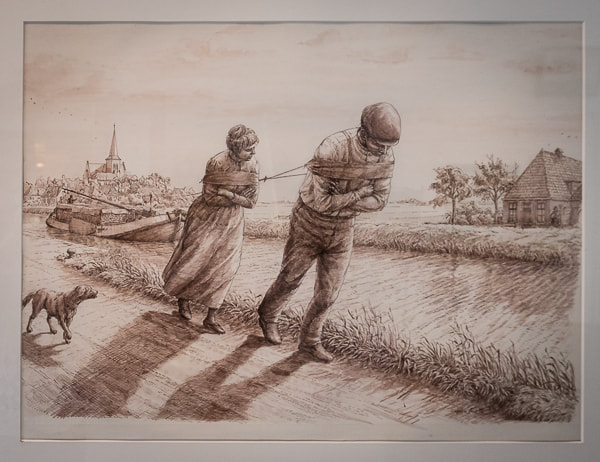 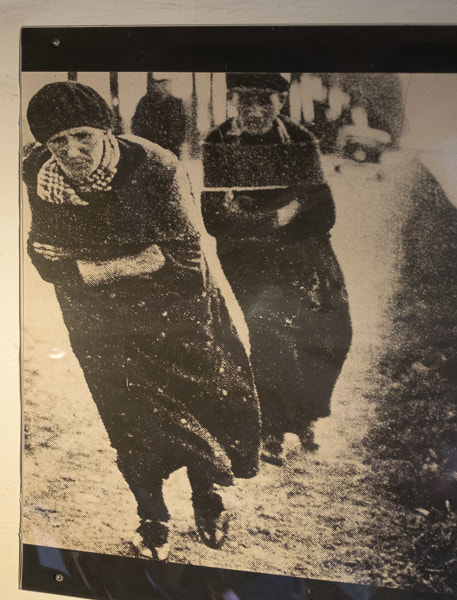 A couple more photos of working on peat boats. 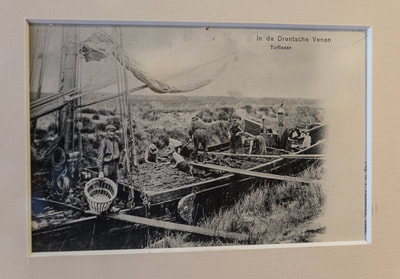 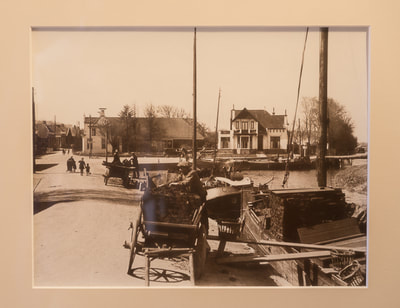 My special thanks to Marcel Kroon and the Rotterdam Maritime Museum who allowed me to view and photographs some of their books in their extensive collection.  Also the ships museums in Sneek and Groningen.
​

I have also found out a little about the original family who owned the boat.

In February 1910, at age 49, he married Klazina van Kammen aged 37.  Kazina died 10 days later.
In August Jan remarried, this time to Kazina's younger sister Anke who was 32.
They had their first child in January (5 months later), a boy Durk, named for Jan's father. 17 months later they had their second son Jozef, named for Anke's father. In 1914 they had a daughter who only lived for 19 days, and in 1916 they had a lifeless child.

In 1925 Jan would have been 55 and the two boys 13 and 14.  This was they year that the barge "Twee Gebroeders" was built at at the shipyard of H. van der Werf in Stadskanaal.  She was referred to as a "Stevenaak".  She was probably named after the two sons  i.e. "Two Brothers".

Jan died in 1937 at about 67.  Towards the end of his life he became known as Jan Schipper Eibes or Jan Eibes Schipper.  Schipper means skipper or boatman, and this was a respected profession.  A measurement of the barge was done in 1937 and the owner was listed as his widow.
​
In 1939 ownership was transferred to Durk and Jozef - the two brothers - who were then 28 and 29. It appears to have remained in the family until 1954 when it was sold to a brick works.

Anke died in 1959, in Grijpskerk, just before her 81st birthday.

Anke, Jan, Durk and Josef were both born in Achtkarspelen, but they were based in Munnerkerzijl during most of their barging life.
In 2017 we went to Munnerkerzijl and we found the grave stones of the two brothers and met someone who knew them.  He said that they never married and their mother lived with them until she was too old to stay on the boat.  He said they took peat to Drenthe. 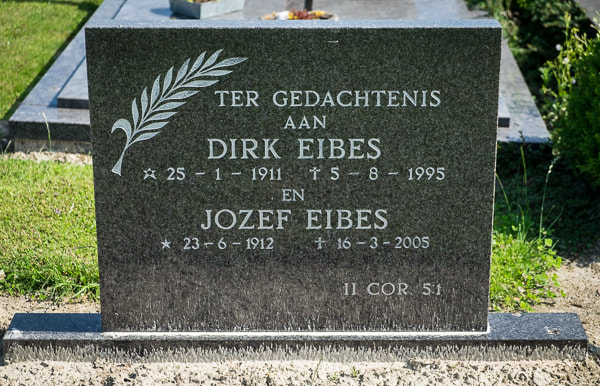 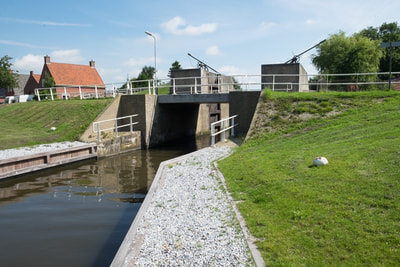 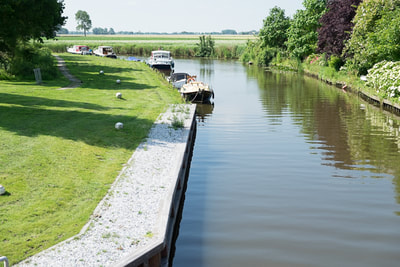 Their usual mooring place at Munnerkerzijl. 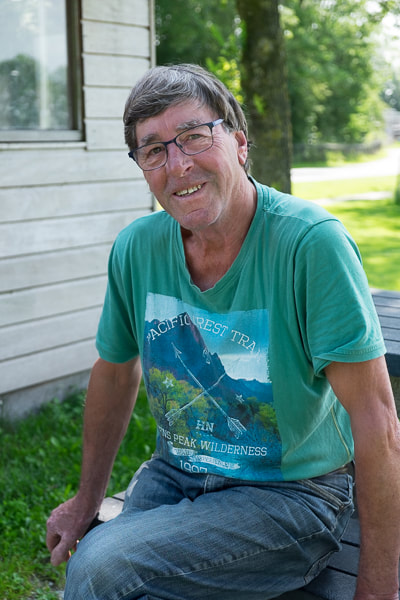 This man actually new the two brothers and spoke about them to us.
It is common that a family would live in the boat with the skipper.  However in some cases, when the boat had a regular fixed route, the family might have had a home on shore and the skipper would have come home on a regular basis. This was called "bird sailing".

Here are some photos of families and their barges.  None of these are the Eibes family though.  ​ 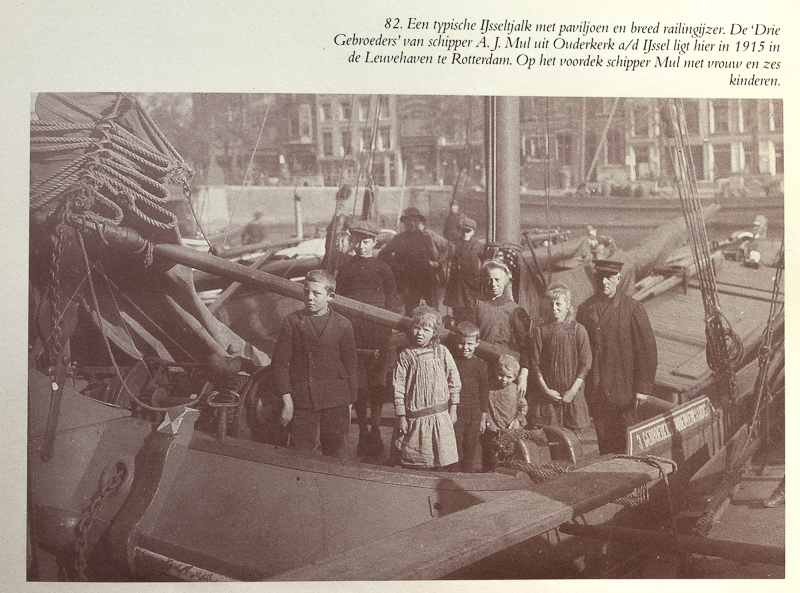 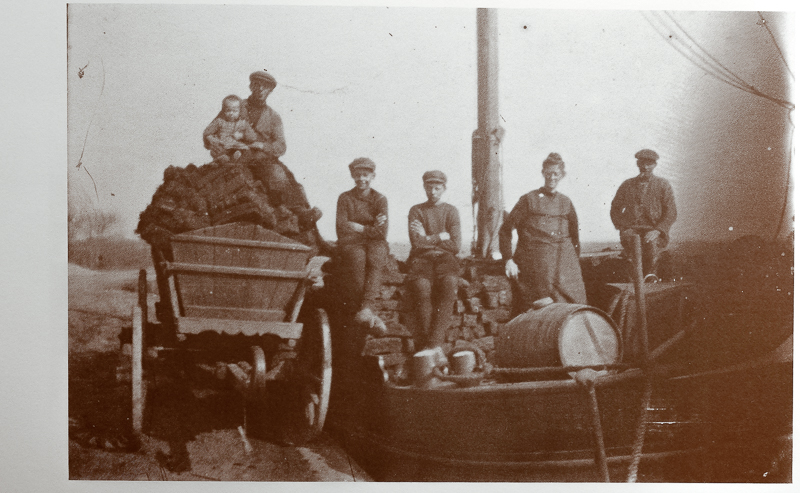