We saw her on-line.  We were amused by the advertisement as it showed the rear room with all the ironing hanging out. 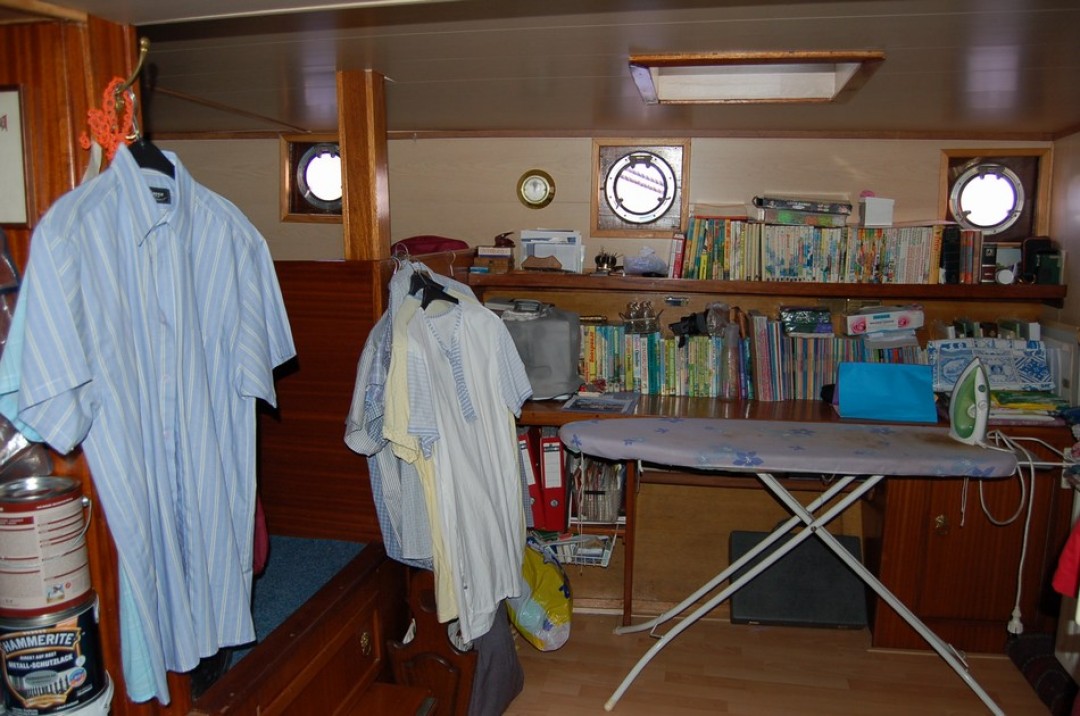 It was hard to tell from the photos exactly how she was laid out, so we asked for a plan of the boat. 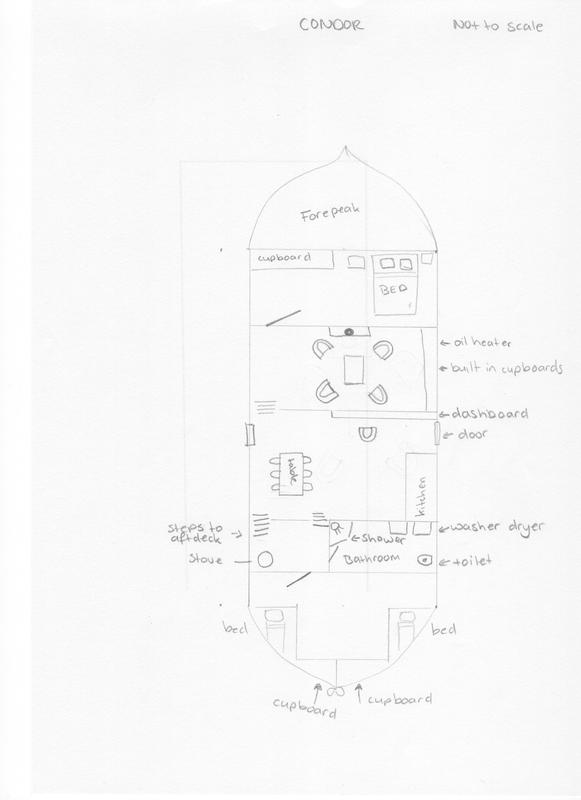 We decided that she matched most of our criteria.  So we asked for someone to inspect her.  Unfortunately they understood this to mean we wanted a survey done and thought it was a bad idea.  In the end we got a friend to visit from the UK and he skyped us from the boat.  This was all very positive so Deb went over to the Netherlands in May to see her - Howard couldn't get away from work.

The things we especially like about her are that she has a large back deck that is easily accessed from the wheelhouse. This has an outside steering position so that we can be outside when the weather is fine.  She has a large wheelhouse with a decent kitchen and dining area - this has nice big windows so we should get great views as we go along.  She also has a large back room that we hoped to convert into our bedroom/study.  The previous owners said they had taken her all the way down the Canal du Midi to Bordeaux so we expected to be able to take her to most places in France.

Our biggest concerns at that time was whether the ceilings would be too low, and whether we could convert the back area into a master cabin/office for us.

We decided to go ahead and we purchased her. We knew that we would do a refit of the back of the boat including lowering the floors and/or raising the ceilings and installing hydraulic steering to give us more headroom. After the survey, which required her to be taken out of the water, she became ours in June. 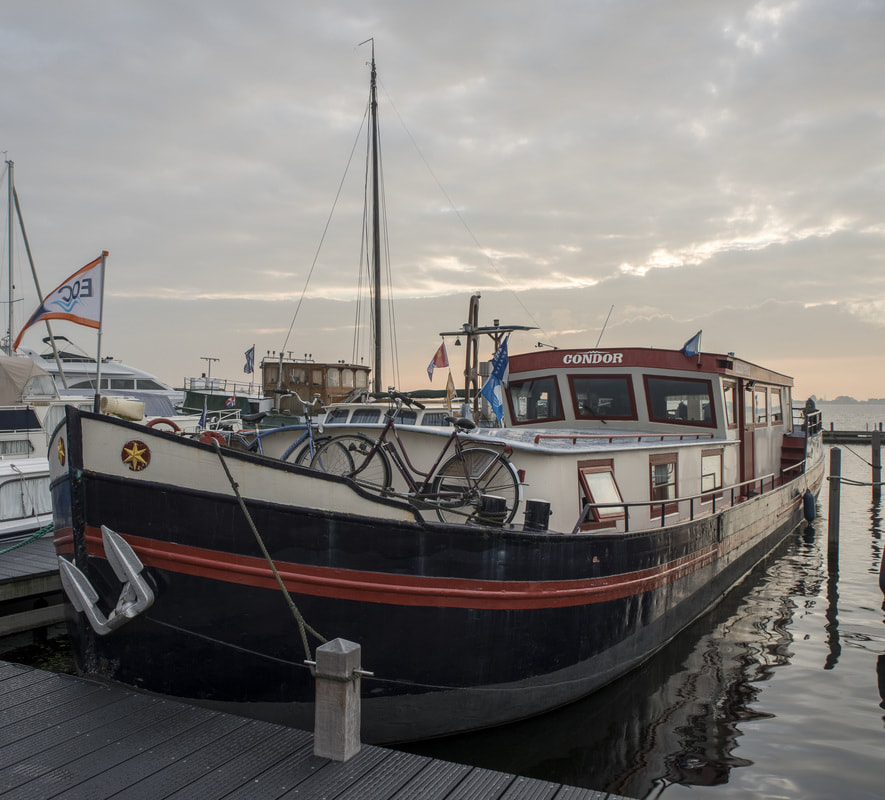 We already had a trip planned for September so we had three weeks aboard.  Deb was a little nervous when we arrived as Howard had never seen the boat, but luckily he loved her as much as she did. The previous owners Henk and Rikki met us on board and showed us around the boat, which was fairly useful, although difficult as their English was poor and our Dutch non-existent.

After a week setting up in De Brassem Jachthaven, we set out to take our boat to Harderhaven near Elburg where she was to stay for the winter.  We learned a lot about the boat but in the end had to leave her in Elburg after the engine water reservoir rusted out and left us with no cooling.  We also had problems with the electrics and Howard didn't like the bathroom, so we expanded the amount of work to be done in the refit.

We did meet Eric - Carpenter, and Jacob - Electrician, and explained what we wanted to have done. And we also met with Mandy, who had been the broker for the sale and who was to be our project manager during the refit. 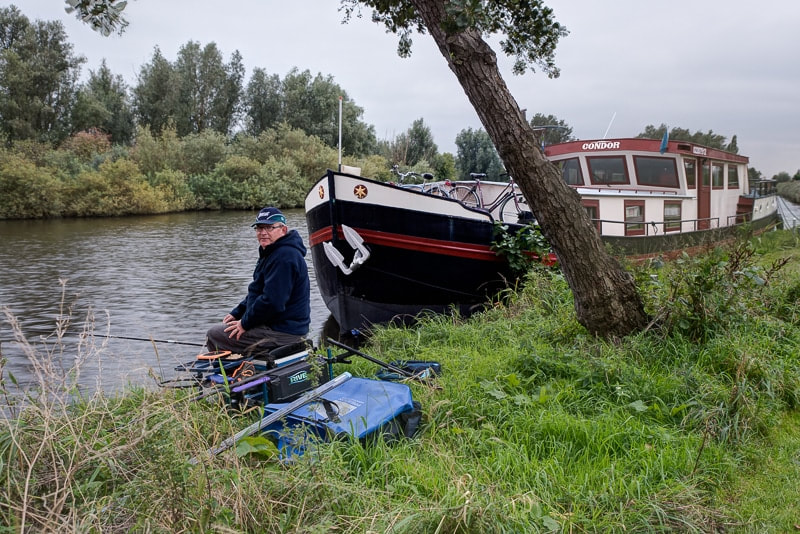 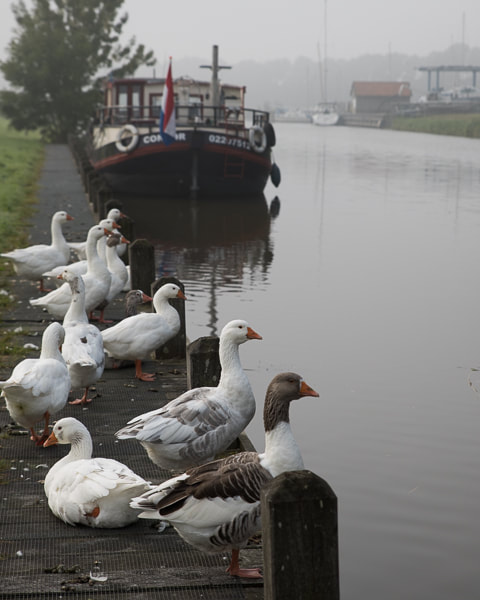 Over the summer Deb taught herself sketch-up and developed some 3D models of what we wanted done in the rear of the boat, and we had a few emails with Jacob about what we wanted for the new electrics.

In June, Deb visited the boat three times in a two week period with Mandy, Eric and his partner Michael, and also Henk (the Steel Guy), and even once with Jacob, to finalise what we wanted to get done.  The boat was moored in an Industrial area in Kampen close to Eric's business, as we couldn't do work on her in Elburg as originally planned and Harderhaven wasn't convenient for the team. 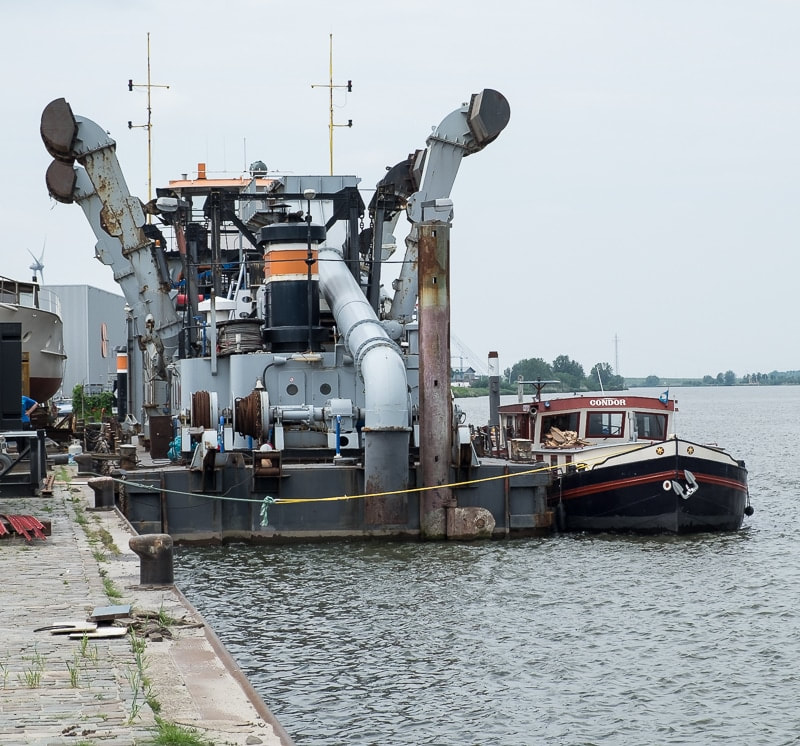 Eric had already removed the walls etc from the rear of the boat so we were able to get a good idea of what could be done. We decided to put in a "pigeon hatch" and remove the two existing skylights.  We also decided to change the orientation of the bed to be longways as the bottom of the boat sloped up too much for our original sideways oriented bed plan.  We also decided on a hanging toilet in the bathroom to avoid the need to have it on a plinth.  And we decided to reinstate two portholes in the rear which had been removed sometime during her life.  We also discussed how to get the most headroom and agreed on getting some steps in the bedroom and a step over into the bathroom, to allow for the drive shaft and the curve of the hull. ​
Video showing the empty boat
Deb updated her sketchup plans so that our team had a clear idea of what we wanted.  We felt that a picture would avoid the mis-translation issues we had sometimes had, and would be really clear what we wanted.

​We knew that with distance and language problems we may not get exactly what we had wanted and accepted that anything better than 80% would be good. ​
In early 2017 we got an email from Mandy explaining that Jacob recommended that we also rewire the engine room as this was a possible safety hazard.  We were happy to agree to this.

Mandy did send us updates on progress and helped out when we had a question or concern. But we were very happy with results when we returned in early April 2017 - probably closer to 95% than the 80% we were expecting.

The day we arrived there were about 5 people on the boat trying to complete everything before our arrival.  The painters had disappeared leaving all their stuff in the wheelhouse.  So things were a bit of a mess. 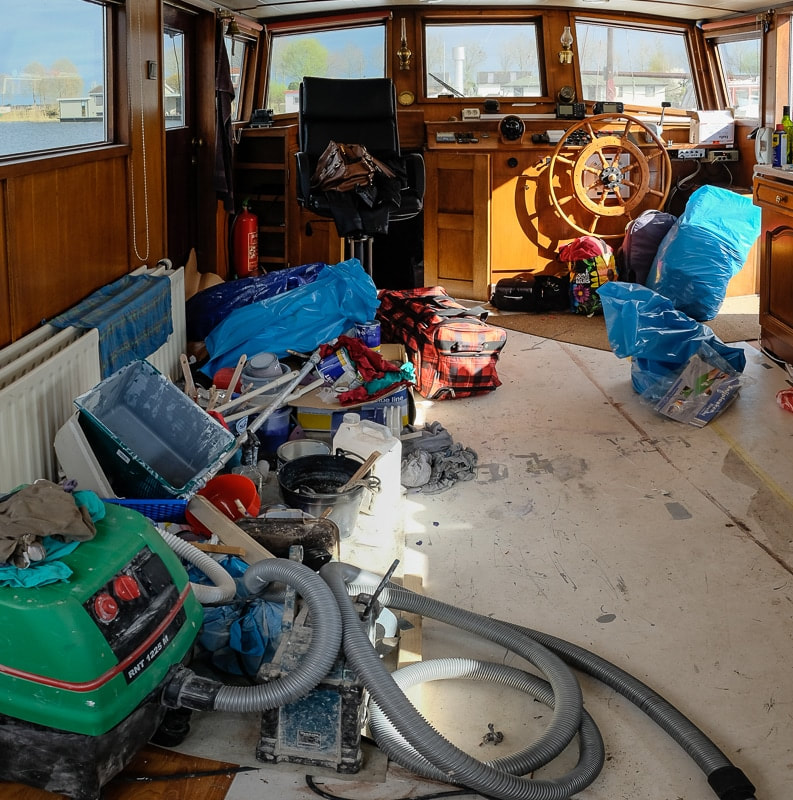 We had heard from Raymond, the mechanic at Harderhaven, before we arrived that there was water in the engine. He was very busy and hadn't had time to look at it properly, but thought that it was probably the head gasket and we wouldn't be able to get parts and would have to replace the engine.  In addition the Generator wasn't working.

We had also had odd emails from the the person who we later found out was the owner of the marina.  He wanted EUR 1000 before he would let the painters back on site.  And also complained that we were using electricity (which had been arranged with the marina manager).  We were feeling uncomfortable there and unwanted, so after Jacob visited to set up the AIS and rev counter we moved the boat to Elburg.

There we had Henk (Captain) and then Henk (Steel Guy), who are both mechanics used to working on older boats (unlike Raymond), look at the engine.  Henk (Captain) found that the fuel lines for the generator and central heater were coming from the wrong place and therefore water was coming with the fuel into them.  He also found a water valve that was on that should have been off, but no-one was exactly sure what impact this would have.  Henk (Steel Guy) moved the fuel lines and did some tests on the engine.  He confirmed that it wasn't the head gasket.  The plan was to change the oil in the engine, which Howard did.
While this was all happening we had Cor and Cyreal working on painting the boat with Howard's help.  Cor was a local that now lived in France but visited every winter.  He was good fun and a hard worker.  Cyreal worked for ESB, the company Mandy also worked for.  With bad weather and holidays they tried to finish painting the boat.  There was still some to do when they both had to stop, Cyreal to go back to his normal job, and Cor to return to France.

We then moved her to Kampen.  This was test for the engine.  But also, after 3 weeks in Elburg we were ready for a change in scenery.  The engine didn't miss a beat and we lot no water or oil.  So it looked like our engine problems were fixed. We had a couple of workers from ESB come twice in Kampen to complete the painting and we also got our new name stickers installed, and finally got our replacement party table for the back deck.  We also bought 6 chairs for the back deck which Howard transported home on the back of his bike - 4 kms. I wish I had a photo of that. 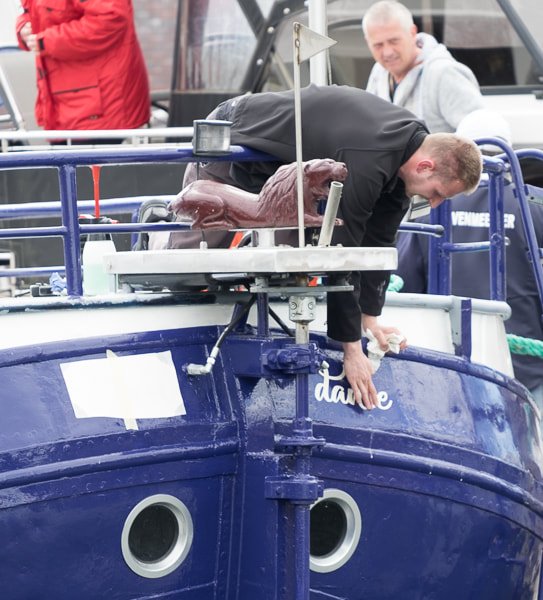 Our generator, however, wasn't working.  The water in our fuel had rusted some of the parts which had to be machined or replaced.  In the end we took off with some guests for our "shake-down cruise" to Over-Ijssel without a working generator.  Unfortunately most places we stopped we couldn't use shore power as the voltages were too low, so we had to rely on the solar panels and alternator for our power needs.  Although Henk visited us in Steenwijk, we didn't get the generator working again until we returned to Kampen.

We had had continual troubles with our oven, it kept tripping our power.  So in the end we replaced it with a convection-microwave oven and an induction cook-top. Eric visited us in Lemmer on the next leg of our trip to install the cooktop and build a shelf for our microwave oven - this gave us a little more storage space in the kitchen as well.

Whilst in Lemmer, Henk (Steel Guy) also visited to replace our throttle.  The old one wouldn't stay at a single speed, and would occasionally jump out of gear when going from forward to reverse gears - effectively leaving us with no brakes, and was difficult to get into gear as well.  We had had a couple of close calls.

That was the last of our refit.  We were now on our own to have adventures.
Refit - Before and After